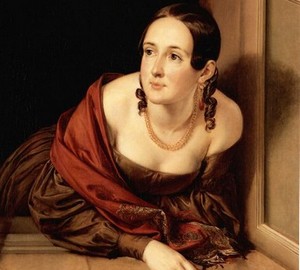 Woman in the window (Treasury) – Vasily Andreevich Tropinin. 1841. Oil on canvas. 87.5×68
Vasily Andreevich Tropinin (1776-1857) is rightfully considered the founder of the Moscow school of painting. In his work, he introduces a strong personal principle into the traditions of art of the era (the general paradox of the image of the model). The circle of his plots and models is partly due to origin (he came from serfs). Often these were characters from the common people – people close and understandable to the master, as well as poor Moscow nobles. Pictured by Tropinin “Woman in the Window” – the heroine of the poem M. Yu. Lermontova “Tambov Treasurer”.

Each portrait of the Tropinin brush is plotted and demonstrates the artist’s interest in the everyday side of human life. Warm color of the canvas, soft, natural light give rise to a sense of reality and create comfort and a good mood. The heroes of Tropinin attract with their simplicity and immediacy, possessing openness and enthusiasm.