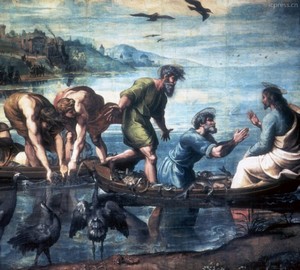 The wonderful catch of fish is one of the miracles created by Christ – the first plot in a series of ten sketches for tapestries that Pope Leo X ordered Raphael for the Sistine Chapel in Rome. Raphael painted these sketches in 1515-1516.; copied by many weavers, they are widely known throughout Europe. The first plot shows a wonderful catch of fish: according to the Gospel, Christ advised two brothers, Simon (named Peter) and Andrei, to again throw nets into the lake after an unsuccessful fishing that lasted all night, and urged them to become “fishing men”. They obeyed the advice, and their nets came full of fish. And although Christ is depicted as quietly sitting at the right edge of the picture, but it is he who is the dramatic center of the composition: the gestures of Peter and Andrew attract the attention of the viewer to him.

SV. ANDREY. Information about Andrei’s life (died approx. 60 g. n. e.) after the death of Christ, they are meager, but according to legend, he traveled to Russia, preaching, performing miracles and turning pagans to Christianity. Among the baptized, Andrei was the wife of the proconsul, who, failing to force this saint to worship the false gods, ordered him to be crucified by tying him with ropes to the oblique cross, which became his attribute.