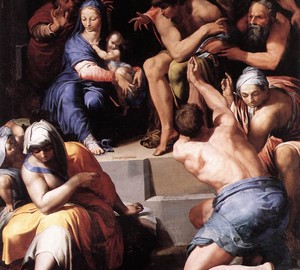 Worship of the Baby Christ – Pellegrino Tibaldi. 1548. Oil on canvas. 159×106
The painting of the Bologna artist Tibaldi (1527-1596), who worked in different cities of Italy, was marked by the influence of Leonardo da Vinci, Michelangelo Buonarroti and the manneri, which was reflected in this picture.

Our Lady on it resembles Madonna Leonardo both in appearance and in that She exists here as if in a dimension other than other participants in the scene. Maria is immersed in herself and does not look noticing what is happening around. Therefore, despite the fact that the composition is extremely compacted, there is free space around Madonna. Worshiping the Baby is summoned in the memory of the characters of the painted Michelangelo of the Sistine Chapel. Their power and complex postures attracted Tybaldi in the first place, because it made it possible to endow the canvas with expression, which was already a manieretical technique.

The combination in one picture of the picturesque styles of so many different artists of the High Renaissance was a feature of the time when the great era was already becoming history.