Worship of the shepherds, Andrea Mantenya 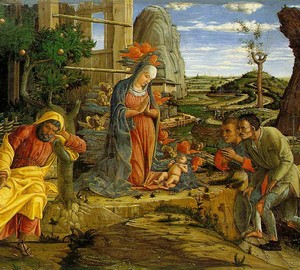 The worship of the shepherds is Andrea Mantenya. Soon after 1450. Canvas, tempera, translated from wood. 40×55.6

Mantenya perceives the events of Christian history as something very close, so there are many living details in his picture – the pose of the dozed Joseph, the torn clothes of the shepherds who came from afar, the common people of these people. But at the same time, portraying adult participants in the scene, the artist slightly changed the usual human proportions, putting on the characters with unprecedentedly high growth. The main characters are close to the viewer, while the landscape goes back into the distance, which emphasizes the solemnity of the entire scene.

Landscape with its harsh rocky landscape, which distinguishes many of Mantenia’s paintings, reinforces the impression of the power of the canvas. The worship scene unfolds on a site resembling a mountain plateau, a rock is depicted in the distance, a sawed tree with slightly grown branches on the right, a mountain almost devoid of vegetation, and only a greening hill is visible in the distance.

Manten’s painting is bright and dry, like a fan of hot winds, and the air is so transparent that the smallest details are visible in the distance. For an artist, the Holy History transforms the earth, it seems like reminds that after the coming of Christ, the whole face of this world has changed and a person cannot live as before: he must become stronger. It is amazing that this impression is made by a very small picture, like many of Manten’s easel works, but not without reason he became famous as a monumentalist.