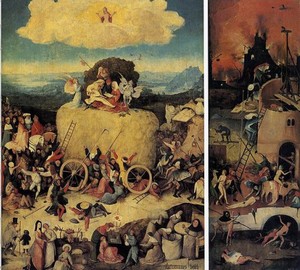 Woz hay – Jerome Bosch. 1516. Wood, butter. 147 x 212 cm
Jerome Bosch is a famous Dutch artist of the North Renaissance, one of the most mysterious painters in the history of Western art.

In the central part of the open triptych “Haystack” is a cart with a huge haystack, around which all actions and plots of the picture develop. The age is attracted by seven terrible half-people- half-bulls: half lions, dogs, bears, fish, wolves. They symbolize pride, despotism, greed, cruelty and other vices.

The wagon is followed by representatives of various estates, each of them seeks to seize hay. People are driven by a thirst for profit, because of which they beat and kill each other. These stories are sins of theft and profligacy.

Only the mighty of this world do not interfere in fights, because this fuss is so theirs. At the top of the stack, people play music to the accompaniment of the minister of the Devil, behind them stands, hugging, a couple of lovers.

In the upper part of the composition, the golden cloud depicts the Almighty observing what is happening, to whose mercy the angel, desperate to enlighten people, calls.

The main motive of the picture is human stupidity and greed, because of which people cannot make a choice between earthly wealth and the ability to live forever in paradise.