Young man with a basket of fruit, Michelangelo Caravaggio 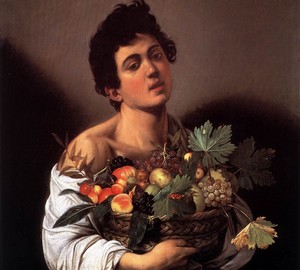 The artist, who influenced all European painting, began with paintings marked with a light color and a lyrical mood. In his young years, Caravaggio lived at the rich philanthropist, papal prelate of Monsignor Pandolfo Pucci, and later at the painter of the cavalier d’Arpino and wrote languid, beautiful young men, then music, then holding flowers or fruits and looking at the viewer from under the half-covered eyelids. One of these characters is depicted on this canvas.

There is sensuality in the picture, which marks similar canvases of the early master: a pretty street boy took a beautiful pose, slightly bowing his head, lowering his shirt from one shoulder and gently pressing his basket. But if the appearance of the person is still idealized, then the talent of the Caravaggio realist, who soon declared himself to be completely manifested in the still presented here. The artist skillfully prescribed not only velvety peach skin and glossy apples, but also dark spots on the fruits and dried leaves.