Zaporozhye write a letter to the Turkish Sultan, Repin 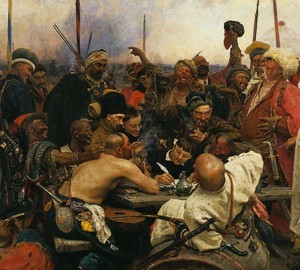 The plot of this masterpiece of the great Russian artist is well known: Zaporizhzhya Cossacks write a response to the proposal of the Turkish Sultan to go to the side of the Ottoman Empire. The text of this answer, full of the most exquisite insults to the “walking of the brilliant Port”, has also been preserved. Before us, a sort of “brainstorming” is the process of writing an answer to the Sultan.

The composition of the picture is a clearly defined center around which the author builds several “circles” filled with different semantic content.

In the center is a scribe. Hardly the only one of the portrayed to be literate. Judging by the clothes, this is a seminary from the Cossacks who undertook to state the response of the Zaporozhets on paper. Creating this letter clearly gives him pleasure. The scribe expresses his joy quite restrained, as befits a person “scientist.”.

Consider the “bottom circle”. A Cossack with a pipe in his hands hung over the figure of the clerk. Apparently, this is one of the main inspirers of the Zaporozhye. It is depicted at the moment of pondering another exquisite swearing word against Mohammed. Another second and a new line of the message will be invented… Further clockwise – the Cossack choked with laughter, followed by another Zaporozhets, that almost falls from laughter, further a half-naked Cossack, with pleasure savoring every word of writing, a pair of laughing warriors loudly, Cossack without a shadow of a smile on his face, still a young Cossack, with pleasure participating in the process of writing a response.

In the outer “circle” two figures are especially noticeable: a laughing cauldron in a red boiled and a gloomy Zaporozhets with a blindfold on his head. They are as if opposed to each other. When carefully examined, far from all the Cossacks succumbed to joy and fun. Here and there are alarming, serious, frightened faces. The Zaporozhets with the bandage seems to imagine future fights with the Turks, future losses… Near the laughing big guy in a red bug, the artist portrayed a skeptical Cossack in a yellow hats. In his gaze is condemnation and anxiety… Skeptical and the Cossack in the orange, peering from under the arm of a laughing Cossack in the center. However, anxiety and skepticism in a clear minority are here. The atmosphere of the picture was laughter, luck, confidence, courage – the main qualities of the soldiers of the Zaporizhzhya Cossacks.