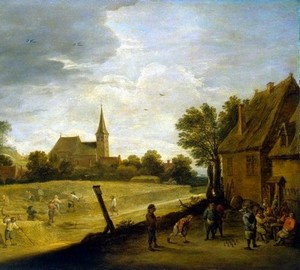 Zhatva (Summer) – David Tenirs the Younger. 1644. Oil on canvas. 49.8×69.6
The theme “Seasons” was popular in the Flemish painting of the XVI-XVII centuries. Turning to the plot of “Harvest” (or “Summer”), Tenirs continued the traditions of artists of the beginning of the XVII century.

On the Zhatva canvas, scenes of summer work and recreation of peasants are simultaneously captured. Background of the picture – landscape with a rainbow and a village church. The rainbow motive is probably borrowed from Rubens’ works (for example, “Landscape Landscape”). However, in the “Hutva” of Tenirs, this motive is interpreted in a peculiar way and has a different role.

First of all, because the rainbow (left) is depicted along with the church (in the center of the background), the spire of which is directed to the sky. Thanks to comparison with the church, the motive of the rainbow makes us turn to its original meaning, which is revealed in the Bible. The rainbow seems to remind both the characters of the picture and its viewers of the covenant between God and man after the end of the chase. God told Noah: “I lay my rainbow in the cloud, that it be a sign between Me and between the earth.”. Thus, a purely genre, at first glance, Tenirs scene has a religious connotation and a hidden symbolic meaning.

The canvas was probably created in 1644, since it shows a stylistic proximity to Tenirs’s other ermitage work related to this time (1644, Landscape with Village zucchini).