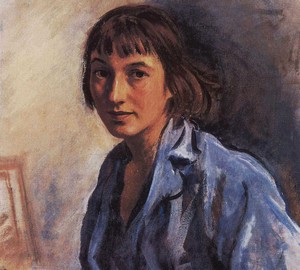 Russian artist Zinaida Evgenievna Serebriakova was born 28 November 1884 the estate of neskuchnoye of the Kursk region. All her career life paintings of light and love to people. She was a wonderful person, a loving wife and mother, a true selfless person, passing through all the difficulties of life. In her heart burned the inexhaustible flame of inspiration which enlightens the internal spiritual world of the artist with their solar lights. Zinaida Serebriakova – the first lady in the art world. Her artistic works are very famous and popular. The society praised the years of work of a wonderful artist! Her memory organized exhibitions and issued postage stamps depicting paintings.

Serebriakova was born and raised in the famous artistic family Benois. Her father was a famous sculptor. Since childhood, Zinaida admired his work. The girl was very like him. Her mother worked as a graphic artist. Grandpa was famous in architecture. Cousin Hope chose the profession of Illustrator.

Zinaida’s childhood passed in his native village, surrounded by forests and fields. Love of nature was born in her soul. The girl admired the blooming gardens, the songs of nightingales and open spaces of his homeland. She grew up introverted, weak child, was serious beyond his years, loved solitude and silence. Parents are often organised home parties, performances, reading favorite books and musical evenings, in which Zina gladly participated. The family lived in the winter in St. Petersburg, in the apartment of the grandfather, and in the summer moved to the village.

Zinaida constantly house painted. She was portrayed on paper, the trees, the sky, the sun, gardens, houses, windmills. She liked the life of the peasants. In them she saw the closeness and love of country, people, nature, animals.

In 1900, a girl entered the women’s gymnasium, which he successfully graduated. Ahead was studying in art school, which was founded by the Princess, the noblewoman, the educator and social activist M. K. Tenisheva. In later years she studied with painter, engraver, and lithographer Joseph of Brazo. The trip to Italy gave her a new experience and refresh your creative plans. Training at the Paris Academy De La Grande Chaumiere brought her well-deserved success.

Z. E. Serebryakova was married to his cousin Boris Serebryakov, who was her senior by four years. The love of young people was amazing! They long concealed his feelings. Her cousin worked as a civil engineer, went to practice in Manchuria. The Church did not give them consent to the marriage, had to get special permission to blessing. But they still got engaged. From the marriage were born four children: Eugene, Alexander, Catherine and Tatiana. They are all found in the life of a creative profession. Her husband graduated early from life. He died from typhus. Zinaida had children, one, until the end of his life remained faithful to his memory. She never remarried.

1914-1917 – the flowering of artistic creativity of Zinaida Serebryakova. At this time, she wrote a lot of paintings on the themes of peasant life and the Russian countryside. Soon, the artist became a member of the society “World of art”, which met with interesting people.

In 1916, the girl was fascinated by the East. She skillfully portrayed on canvas Oriental beauties in the images of the southern States.

The revolution of 1917 brought the family of Benoit unrest, suffering and hardships of life. Rampant devastation, barbarity, robbery and looting. The family Packed up and moved to serpents, later in Kharkov. Their possessions were looted and destroyed. Young artist drawing with charcoal and pencil, oil paints were not. She was a member of the archaeological Museum in Kharkov and made sketches of different Museum exhibits.

In 1920 Zinaida went to live in Petrograd. Here she talked with the creative Bohemians of the city, many painted on a theatrical theme, was inspired by the poetry of Pushkin, Block, literary works of Dostoevsky. It was surrounded by the muses. She painted self-portraits, nature, portraits of loved ones. A brilliant portrait “of a toilet” brought her fame and notoriety. The artist approached the work with great diligence. Its author’s works filled with earth’s harmony, strength of motherhood, plasticity and a great sense of beauty.

In 1924 Zinaida Serebriakova went to work in France. But in Paris, she begged, as the demand for pictures is almost not there. Rare earnings she sent the children to Russia. Elderly mother needed help. Her children, Alexander and Catherine received French citizenship. Daughter Katia was supported by Zinaida to the end of her life. Thanks to my daughter picture mother returned to Russia and gained popularity there. The last work of Serebryakova – “Self”.

From 1928-1929 and 1932, the artist grew up in Morocco, where he painted Arab subjects. There she wrote a series of paintings of the fishermen of Brittany. 19 September 1967, her career was cut short. She died of a stroke. Buried in France.